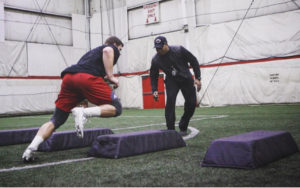 RETURNING IN THE SPRING OF 2021

We encourage players to do a little bit extra. Our small group training is available to athletes in grades 5 and up. We offer on the field training through any of the coaches listed below. Every time you step into one of our private sessions you will have access to some of the very best coaching available to aid your performance. Training is conducted with respect to Covid19 safety practices suggested and published by the MHSAA.

Small Group/Private Training sessions are for up to 6 players and lasts up to 90 minutes. Training takes place throughout the week at various locations across Metro Detroit.  (dependent on availability and selected locations by the instructors and clients).

Skill Position and Big Man Pricing (Grades 5 and Up)

QB Club Pricing (Grades 5 and Up)

What to bring: Cloth face covering, hand sanitizer, personal hand towels and large water bottles (No sharing of towels or bottles), QB’s must also bring your own football

Please contact us directly via the form below to connect with an instructor and schedule an appointment. Once scheduled, you can then make payment arrangements.

Coach Coleman is a former Farmington Hills Harrison High School three time All-State Quarterback, All-American Quarterback and MVP recipient of two state championships. He was selected as the Michigan High School All-Decade Dream Teams quarterback and team captain (1980-1990). Mill is a former Michigan State University captain, three year starter (quarterback, receiver, running back and punt returner). During his time at MSU, Mill was once named MSU Team MVP. After college, Mill went on to play professionally with the Chicago Bears and Montreal Alouttes before a knee injury ended his career. Mill is considered one of the top 3 all-time high school football players in state history.

Coach Kevin Glenn attended Detroit St. Martin Deporres High School where he led them to two State Championships in 1995 & 1996. He was voted as one of the Top 5 all time high school quarterbacks in Michigan history by the MHSAA. Kevin played his college ball at Illinois State University where he was a Four-Year Starter and Letterman, set 25 school records for the Redbirds, and completed 645 or 1,119 passes for 8,032 yards and 61 touchdowns. Kevin went on the play18 seasons as a quarterback in the Canadian Football League (CFL). He is the only Player in CFL history to (sign with) be affiliated with every organization. His career CFL numbers include 52,867 passing yards, 294 TD’s in 304 career games; establishing him as the 6th All-Time CFL Passing Leader, 16th All-Time Professional Football Passing in North America (CFL/NFL), 2 Grey Cup Appearances, an East nominee for the CFL’s Most Outstanding Player award in 2007, and CFL East All-Star in 2007. He threw for a career-high 506 yards against Montreal on Oct.18, 2009. Kevin set the Hamilton franchise records in 2010, with 33 touchdown passes and 388 completions. He also led CFL in 2007 with 5,114 passing yards and a Blue Bombers team record of 388 completions. In 2011, Kevin won the Tom Pate Award for outstanding community service.

Edwin Baker was a US Army All-American running out of Oak Park High School (MI) where he earned a scholarship to Michigan State University. Edwin was a star that earned All Big Ten Honors and was eventually drafted in the 7th Round by the San Diego Chargers in 2012. Edwin’s NFL career also included stops in Cleveland and New Orleans.

Leon is a former DI athlete at Eastern Michigan University.  He won state championships at Harrison High school as a player and coach. Jefferson has years of coaching experience on the JV and Varsity levels working with defensive and offensive linemen. He has also worked multiple camp series across the country as a coach and evaluator.

A former BIG 10 athlete with pro football experience, with years of speed and performance training experience, Coach Batten is a Defensive Coach/Coordinator with Michigan Elite Football Club and also worked the Elite Football Camp circuit . He also served as linebacker coach and talent evaluator for USA Football and the U15 Developmental Games. Coach Batten is a member of the Catholic League Hall of Fame.

Terry Richardson, a 2012 graduate of Detroit Cass Technical High School located in downtown Detroit, MI. Terry was a highly talented recruit out of Cass Tech and a 2012 Under-Armor All American.  Terry was a member of the University of Michigan Football team from 2012 to 2016 and a three-year letterman during his tenure. While a member of the football team, he participated in three bowl games Outback Bowl, Buffalo Wild Wings, and finishing off with a 41 to 7 Citrus Bowl victory vs Florida Gators. Terry graduated in 2016 with a Bachelors in Sociology as well as a Marketing & Sales Certificate from Ross School of Business.

Scheduled Payment Plans available for all Season Passes at Checkout!